2000 September, Elle entered in my life

As Gene was already in my home, our friends and I , had regular informal meeting at each other home. During one of this friendly reunion, on September 2000, somebody talk about a new 15".5 doll on the market, that most of us didn't hear about. it was the Elle doll from Jakks Pacific Cie. the price was fare compared to the other dolls this size on the market at the time. it was already late in the evening but we were in Canada eh/ one of us called Toys'R'us to ask if they carried the doll, as the affirmative our friend said.."-can we come now?" it was 21:30 near closure time for the store, but the manager agreed to let the store open a little bit longer as we were, all of us, crazy to see this new girl. So, up we packed into 2-3 cars and drove quickly to the mall, the store was open indeed and we all rush to the Elle alley. and there whoa!! we were amazed by this new comer long (folding)legs, long hair, beautiful face, original cloth, a trunk and vanity case.
She was called
"A walk on the Wild side" 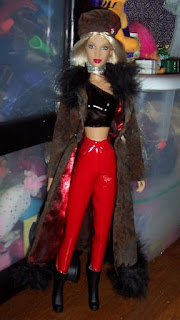 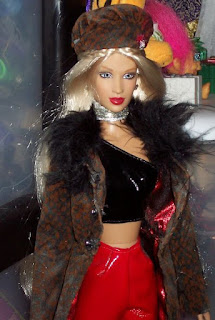 this is the one (sorry not my picture) I brought back home
I payed C.$ 42.79 (ttc) and her name became Olga
Here some other doll of the series,
we didn't leave the store empty handed! 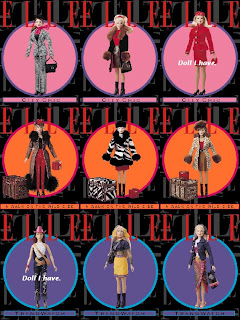 Unfortunately they aren't to much information about those dolls, as they are not longer in production.today.

I found this pics on the web (if someone recognize them, as his/her own, and want me to disclaim his/her name or remove the pictures just let me know. thanks.

Posted by Dominique at 8:38 PM