Since the convention I was of course member of the Barbie Collectors Club of Alberta, and I loved being there. I learned so much with all the passionate members. We had meeting each month downtown Calgary, new dolls were brought and presented to us, vintage were described, prizes were won,  fun was floating around, surprises, and home meeting were often part of the game.
Actually it was through those Barbie meetings that I meet Gene Marshall  in "person". One of our friend brought her to show and tell, OMG! I was so in love, the scale of this Lady created by Mel Odom ! this is what convince me first, it was the size, the proportions were just perfect. she was not too heavy  "busty Bimbo", as her size could have allowed, but in the contrary, a charming very feminine figure with oldies fifties flavor, long  bendable legs, and a very tiny waist. I was already dreaming about sewing for her. I honestly was not to found of the heavy make up, but that was certainly not a reason, not to have her. 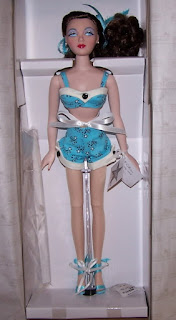 2 weeks later, she was home. A perfect Simply Gene Brunet entered my life and I was in heaven!
we started to meet between friends for special Gene reunion. Meetings were informal but very entertaining. I was discovering new dolls, new outfit and  new life as my friends were absolutely crazy about her as well. Everything out on the market, basically arrived at one house or another and during the meetings we all had the wonderful opportunity to see for real, to touch, inspect, imagine the life of Gene Marshall.
Posted by Dominique at 10:16 PM